How Did We Get Here?

We’ve all been here, right?

In a status meeting…

Or … fill in your own “how did we get here?” experience.

So how did we get here?

Are you the only one who thinks the problem is obvious?

But no one wants to be the first to point it out.

No one wants to point out that pouring more money down the hole of a bad idea … is a bad idea.

It’s called the “sunk cost trap.” Having spent money on something, we’re pyschologically likely to keep spending money, even in the face of evidence that it’s not working – as you can see in the clip from our bestselling program The Abilene Paradox.

Abilene Paradox clip for preview only; not to be used in training.

But as you can also see in that clip – 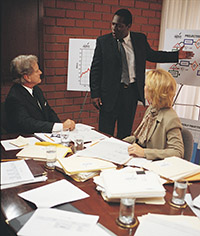 and as you’ve probably noticed in your own experience – once one person has the courage to step forward and ask the tough questions, other people will admit that they were wondering the same things.

The consequences of failing to address real problems are significant.

Even though it might feel safer to everyone involved, “going along to get along” is not a good policy when you (and everyone around you) is silently wondering how did we get here?

How do you get out of here?
Start with courage. Live it yourself and encourage it in others.

Then – of course – train your employees and teams on practices proven to help teams avoid ineffective group dynamics like false consensus and the "sunk cost trap."