How to Stop Sexual Harassment Once & For All - Awareness to Action

Destigmatizing the Conversation
Thanks to viral campaigns, trending hashtags, and persistent press coverage, the issue of sexual harassment in the workplace has been put in the hot seat the past couple years. Organizations are stepping up to the plate— publicly addressing the issue head on in an effort to encourage others to do the same. From global walkouts protesting current policy (or lack-thereof) to company-wide shut downs for proper harassment training, the resounding message of employees is loud and clear: We want change.

But, as we know, change takes time, especially for behavior-based issues such as sexual harassment. This is precisely why it is and has been such a pervasive plague within workplace corporate culture. Eradicating sexual harassment from the workplace requires a thorough understanding of where we are now and where we need to be, as well as copious amounts of exposure and practice. Let’s start with where we are now.

Where We Are Today 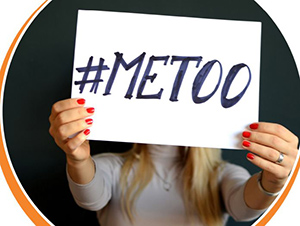 Sexual harassment is illegal sexual conduct in the workplace. It is a form of sexual discrimination and defined by Title VII of the Civil Rights Act of 1964 as, "unwelcome sexual advances, requests for sexual favors, and other verbal or physical conduct of a sexual nature. " States and local municipalities have expanded protections that include offensive comments regarding someone's sex, sexual orientation, gender identity, gender expression, transgender status, pregnancy, childcare, and related medical conditions.

The 4 Types of Sexual Harassment

Even after #metoo, a majority of sexual harassment cases still go unreported as victims and witnesses fear they will face retaliation should they speak up.

Victims Fear Retaliation
It was found that the #1 reason victims don’t take action when they’ve been sexually harassed is that because they fear they’ll lose their job or their income/tips. Other reasons include worrying:

Bystanders Fear Responsibility
A bystander is someone who witnesses another person being sexually harassed, knows it’s wrong, yet does not take action. In addition to fear of retaliation, a bystander’s lack of initiative may spur from two other reasons:

Until recent years, many companies still adhered to sexual harassment policies written in the 1980’s. While states like New York, California, Connecticut and a few others now mandate stringent training requirements, most states continue to leave decisions concerning sexual harassment in the hands of employers. Of course, this only exacerbates the inconsistency, as beliefs about what constitutes sexual harassment vary from person to person. Despite a unifying theme of “zero-tolerance,” without state or federal policies to guide them, many organizations fail to define what behaviors are prohibited and how sexual harassment prevention rules will be enforced. Finally, there’s the issue of ineffective company policy around handling sexual harassment complaints. Confusing filing processes and other bureaucratic hoops can lead to employees feeling like they’d rather endure or ignore the harassing behavior than go through the grueling process and paperwork of filing an official claim.

While there’s been a lot of progress in recent years addressing “zero-tolerance” at all levels, leadership is still faced with a quandary: Taking all employees, including senior level and above, off the job for 1-2 hours of training (in some states, every year) poses a huge cost and logistical issue to the company. That being said, culture change starts at the top; so the question for today’s leaders becomes: how do we make sure our training is effective and impactful enough to make up for this opportunity cost? Additionally, the cost of NOT training employees can lead to millions of dollars in legal expenses, higher employee turnover, increased absences, decreased engagement, and reduced overall productivity.

It’s no wonder sexual harassment training has yielded a bad rap—it hasn’t been effective (for the most part). Most training programs in circulation do nothing to engage employees or push for behavior change. Instead, the focus is on minimizing legal implications and making sure companies don’t get sued for failing to deploy sexual harassment training. Below are the most common reasons employees “tune out:”

Additionally, once training is deployed, there is often little to no follow-up and no link to the greater mission of building a workplace where everyone feels safe and respected.

A Media Partners survey of nearly 150 customers found that the #1 challenge faced with Sexual Harassment Training was “Employees don’t want to take the training.” In addition to the reasons already listed, employee resistance may also have something to do with their current outlook on the issue. Perhaps it’s the fact that the topic of sexual harassment still holds a social taboo, or that employees have a cynical outlook on whether or not anything will actually change. In either case, it’s imperative organizations work to change the perception around sexual harassment prevention training so it’s seen, not as the company’s way of “paying lip service” to the issue, but as an ongoing, top-down organizational commitment to ending inappropriate behavior and sexual harassment in all its forms. Additionally, organizations should strive to instill confidence within employees that the right steps will be taken should sexual harassment prevent itself.

Where We Need to Go

✔ SEXUAL HARASSMENT PREVENTION: WHAT EMPLOYEES CAN DO

You often hear the phrase “it takes a village” in the context of raising children. However, the same philosophy can be applied to successfully running a company. Employees are the bedrock of your organization — they drive progress, embody company culture, and keep the cogs on the wheels of productivity turning. So when it comes to driving successful change initiatives, employee buy-in is essential. Without it, the organization is fighting a losing battle. 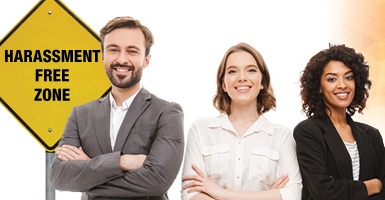 Below are a few things employees can do to support their organization’s sexual harassment prevention initiatives. Have managers share this list with their employees!

Instead of adopting a negative attitude around ineffective sexual harassment training of the past, look at it for what it is today: an opportunity to be part of real change within your organization. A positive outlook on any initiative is integral in true culture change.